Almost near to the end of a major Sitecore as well as infrastructure upgrade from Sitecore version 7.2 to 9.0.2. Thought of penning my upgrade story which becomes more spicier with lots of mysterious twists by having xConnect in the lead role. 😊

Just like all my previous Sitecore upgrades this was almost similar apart from adding Sitecore Official Nuget, CI/CD using Octopus and most importantly the tedious patch up between xConnect and the client certificates issued by organizational authorities. Using Sitecore official Nuget for latest assembly references and Express migration tool for Database migration, the upgrade was a bit smoother without any critical errors/hiccups. But when we were at the stage to test the complete ecosystem in XP9 platform from hitting the website and generating the related reporting graph on the Experience Analytics Dashboard, resolving the issues with xConnect and non-self-signed Client Certificates was such a bumpy ride. 😦 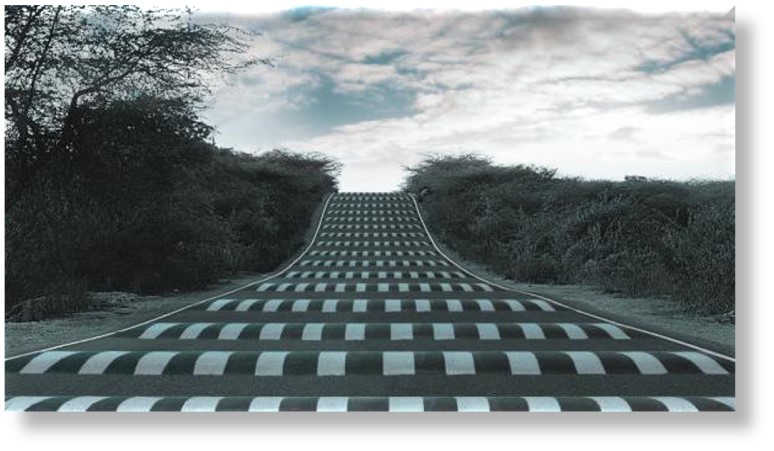 We faced a lot of issues and it was troublesome to find root cause behind the incompatibility between xConnect and Client Certificates. I also get a chance to chat with some of my Sitecore community friends over Slack and almost everyone who implemented Sitecore 9 for the very first time, sailed the same boat. Though as always I found a lot of excellent blogs and questions on SSE with similar problem and relevant answers. But for us the culprit was something else but not Certificates hence thought of blogging a consolidated post with all the issues we faced and our approach towards Nirvana!!!

So we have a scaled Sitecore 9.0.2 environment with

Please have a look at the Sitecore Network Topology Diagram. The CM and few of the databases were on the corporate (internal) network whereas the xConnect, Solr, SQL and the CD Roles were on DMZ behind F5. 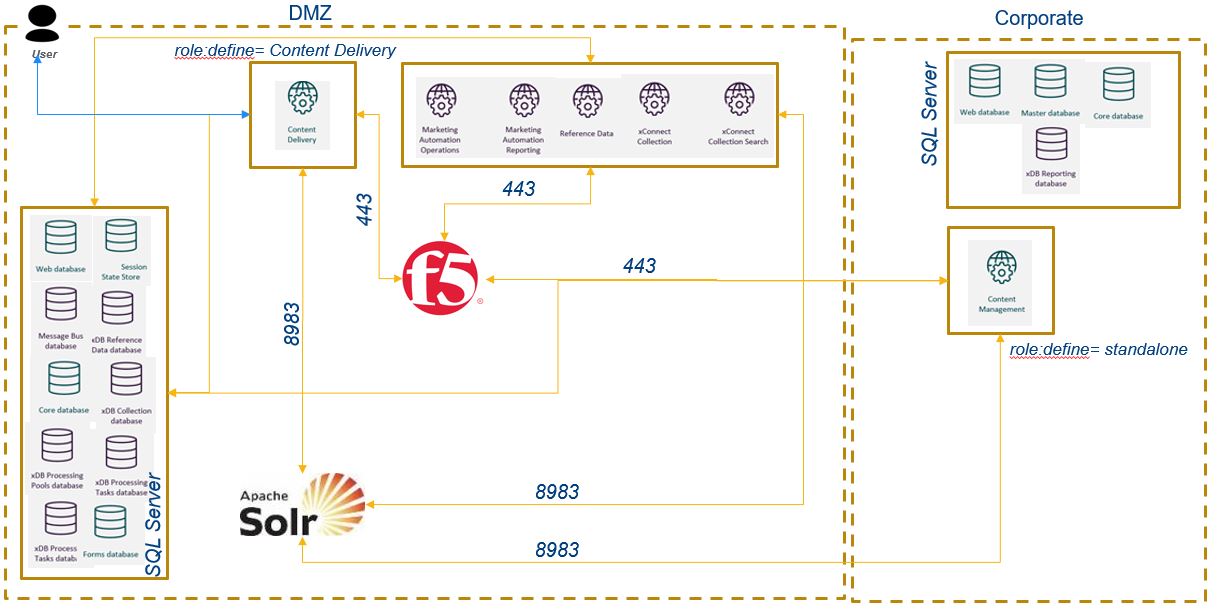 Following are the series of exceptions we faced one after another when we were applying the fixes during our research and debugging.

xDB Unavailable with Time Out Exception

Could not create SSL/TLS secure channel

So we tried multiple solutions to establish the connection between xConnect and other roles, especially with CM while we were trying to generate the graphs on the Experience Analytics Dashboard. Though I will try my best to elaborate the approach of our debugging and research, but if you have any questions please free to drop a comment on this blog or reach out/DM me on slack or social channels.

At the very beginning we had the Invalid Certificate exception on both CM as well as CD role, hence the traffic on CD was not even being recorded in the Shard databases. We did some research and found following suggestions on few blogs and SSE about the known root causes behind certificate incompatibilities with xConnect:

Note: This question on Sitecore Stack Exchange was the source of all the possible root cause analysis mentioned below.

Certificate not installed or Thumbprint missing/incorrect

There are possibilities that either the certificates are not installed on server/client or the thumbprint is missing/incorrect in the required configuration files.

Result: We verified multiple times and everything was perfect with this aspect.

Result: We had NO untrusted certificates in the trusted root authorities, hence this was not our case as well.

Once the vanilla installation is done as Post Installation Steps we need to execute a SQL script which grants required permissions to collectionuser on the Shard Databases.

Result: We are on version 9.0.2 and the post installation script was for initial release only, I guess they fixed it for the later releases and the permissions are now granted during the installation itself. Though we verified on the database level, the collectionuser had all the permissions mentioned in the SQL script.

Verify if a valid Server certificate is not assigned in IIS to the respective instances.

Result: Valid SSL certificate is installed and assigned on all the IIS Instances.

Verify the SSL Setting in IIS is configured to Accept the Client certificates for all the xConnect instances.

Result: It was already selected as ACCEPT.

Make sure the Network Service, IIS User and App Pool have full access to the respective client certificate.

Result: We provided all the required access to the certificates.

No luck so far, we cross verified all the reasons mentioned above and problem still persists. Hence we decided to dig deeper.

Since we verified almost everything related to certificates hence we decided to troubleshoot other areas of the topology.

We decided to give it a shot by allowing invalid certificates.

Result: Surprisingly the errors were gone by allowing the invalid certificates and we had cleaner log files. Then we generated some traffic and guess what, the data populated in the Shard DBs. For testing we reduced the Session Time Out on CDs to 2 minutes. After couple on minutes data populated in Reporting Database and we see the reports on the Analytics Dashboard. Looks like the entire cycle is up and running now. BUT WHY, WHAT ARE WE MISSING WITH CERTIFICATES?

Now we are confirmed that there is something definitely wrong either with the certificates or any related configuration which is not allowing the communication to take place via SSL.

Pro tip: In such disastrous situation make sure the Server Technologist or Info Sec person is your friend and I find myself very lucky here. 🙂

So we reverted everything back to the previous state to disallow invalid certificates. And the 401: Invalid Certificates exceptions are back. Worked closely with the security team and here are the steps we followed for further debugging:

If you have a look at the topology diagram above the xConnect and CD instances are behind F5 whereas the CM is not cause it is on an internal network. Hence to avoid the possibilities of something misconfigured at F5 level, we removed the SSL profiles from the VIP. But this was not sufficient to resolve the issue therefore we temporarily allowed a bypass of the F5 altogether by putting in a temporary firewall rule to allow CM and xConnect to communicate directly.

When we configured this the 401: Invalid Certificate exceptions were gone. And we start getting the Exception #3 above regarding Unauthorized Access.

Important: HTTP profiles are incompatible with encrypted pass-through traffic, such as Secure Sockets Layer (SSL), and require a Client SSL profile to decrypt the traffic for L7 HTTP inspection. If the virtual server processing the encrypted traffic is configured with an HTTP profile and no Client SSL profile, the connection will fail.

In our case since the xConnect boxes are in DMZ behind F5 and the URL for the Distribution Point Name for the CRL check was internal. But the traffic from external network to internal network was blocked. Due to this the CRL Check was not taking place and we were getting the Could not create SSL/TLS secure channel exception. If you face the similar issues, visit the CRL Distribution Points on your certificates.

As a temporary solution we decided to disable the CRL check for the certificates. To achieve this we added a registry entry DefaultSslCertCheckMode at HKLM\SYSTEM\CurrentControlSet\Services\HTTP\Parameters\SslBindingInfo for every Role which need client certificate authentication i.e. all the xConnect Roles. Please have a look at this wonderful blog about how to Disable Client Certificate Revocation List Check on IIS.

Note: Though as a permanent fix the security team is revisiting the current configuration they have for the CRL checks. Once that is fixed we will be enabling the CRL Check again on IIS.

VOILA!!! Everything was up and running using the same set of certificates. No exceptions in logs and latest data on the Analytics Dashboard. The Ultimate Nirvana!!!

Every problem is an opportunity to learn something new. For us reason behind the incompatibility between xConnect and Certificates was NOT Certificates but the F5 and CRL Check. Hence when you are having fun with xConnect for the very first time make sure to inspect every single aspect of your entire topology. Good Luck!!!